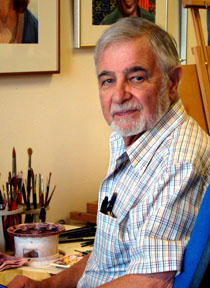 Robert Gutchen
Retiring in 1997 after 35 years as a professor of history at the University of Rhode Island, Robert Gutchen took up watercolor painting. He and his wife moved to New Mexico in 2004. He is a member of The Artist Studio in the Hoffmantown Center. His work has been shown at numerous juried exhibitions, including the Watercolor Society of New Mexico, MasterWorks of New Mexico, the Western Federation of Watercolor Societies and elsewhere. He has a number of awards to his credit.
His work will appear during October at the fall 2011 shows of the New Mexico Watercolor Society and the Portrait Society of America, both in Albuquerque. He was elected to the Board of ACS in 2011 and served as Vice President until 2015. He specializes in portraiture, and he is glad to accept commissions. He can be reached at 505-771-1672.